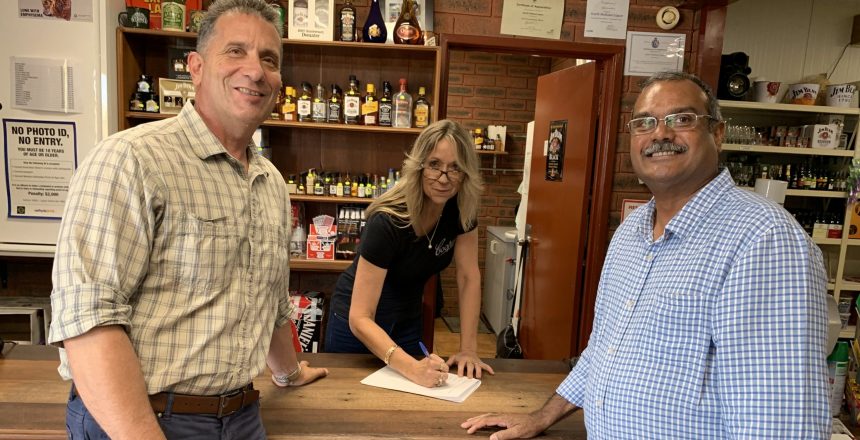 The Banned Drinkers Register (BDR) trial in the Pilbara has moved one significant step closer today after the Australian Hotels Association (AHA) WA and the Liquor Stores Association of Western Australia (LSAWA) joined the Tourism, Liquor and Racing Minister Paul Papalia in Port Hedland for a series of consultative meetings with community stakeholders.

The meetings revolved around informing stakeholders of the processes in relation to the BDR and clarifying any misconceptions they had about the rollout of the project.

AHA (WA) CEO Bradley Woods commended the State Government and in particular, Minister Papalia, for his support of the targeted measure to reduce alcohol-related harm.

trial of the BDR, which follows a 10-year industry led battle to get the initiative up and running,” Mr Woods said.

“With technology rapidly changing how we work, live and interact with each other, the BDR has the potential to be at the frontier of harm minimisation for alcohol fuelled anti-social behaviour, particularly in WA’s regional and remote communities.”

“It’s encouraging to see a Minister taking the “bull by the horns”, listening to industry and making a decision for the benefit of the entire community. We know that blanket alcohol restrictions don’t work.

We know penalising many for the sake of a few bad apples isn’t the way to solve these issues,” Mr Peck said.

“One of the most significant elements associated with the BDR is the fact that for every person who is placed on the register, by way of a WA Police issued Barring Notice or Prohibition Order, are the series of wrap around health services that will be on offer.”

“Right now, there is no other system in place that targets the problem drinker and triggers the treatment services to help rehabilitate and counsel the affected person.”

Mr Peck said the benefits for the community at large were wide-ranging and the trial would demonstrate in the fullness of time, to effectively manage problem drinking and associated domestic violence and anti-social behaviour.

Both industry associations congratulate the local community and industry stakeholders across the Pilbara for their perseverance in working to ensure the BDR becomes a reality.

The trial is expected to commence with an initial systems test in Port and South Hedland with the rest of the Pilbara to follow soon after.