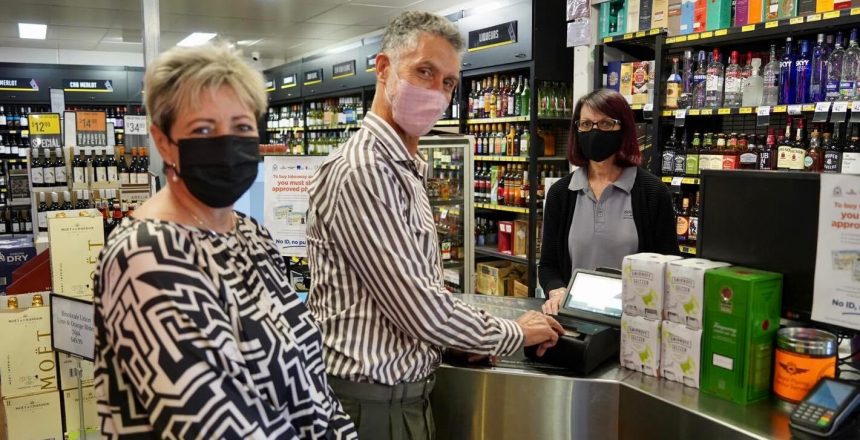 Licensees across the entire Goldfields region of Western Australia have now been equipped with revolutionary technology which can determine whether customers have been barred or prohibited from buying take-away alcohol.

From today, the trial of the Banned Drinkers Register (BDR), comes into full effect after being initially rolled out in several northern Goldfields towns late last year. The trial was launched in Kalgoorlie-Boulder by Liquor Minister Dr Tony Buti (centre pictured) alongside Kalgoorlie MP Ali Kent and Yvonne from Liquor Barons O’Connor.

Under the trial customers who enter a liquor store must show a valid form of photo ID which is scanned at the point of sale. No alcohol can be purchased without approved photo ID.

The Goldfields is now the third authority across the state joining the Pilbara and Kimberley regions with the BDR. The register is designed to assist licensees in addressing alcohol-related harm by enabling them to identify people prohibited from purchasing takeaway alcohol.

People are placed on the register by way of a police issued prohibition order or a barring notice.

Right now, 14 people in the Goldfields are on the BDR.

People can also be placed on the register voluntarily.

The CEO of the Liquor Stores Association of WA, Peter Peck said the project had gone from strength to strength since the initial trial commenced in the Pilbara in December 2020.

“I’m proud of how our members have embraced this project. They have volunteered to be part of it, and we are seeing reliable results in curbing anti-social behaviour.

Mr Peck said he hoped the State Government would consider implementing the BDR in other regions like the Mid-West and Gascoyne regions.

“The issues are no different there to what we have in parts of the Pilbara and Kimberley.”

“We believe the BDR could go a long way in combatting some of the well documented anti-social issues they’re experiencing at the moment.”

“We think it could be a strong deterrent for problem drinkers, and it could be a vehicle in helping rebuild some solid relationships across those communities” he added.

The Goldfields trial will be part of an independent evaluation undertaken by the University of Western Australia.